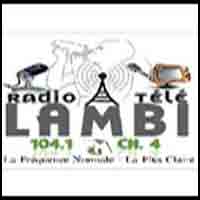 Radio Tele Lambi founded in Corail in Grand’Anse, on June 27, 1997, and now located at 76 Stenio Vincent Street (Lower Town), Jeremie. It transmits on 103.9 FM and 104.1 FM Stereo, and Channel 4 for Television. From his CEO, the Honorable Senator Michel CLÉRIÉ, the Lambi Radio TV gets to have a sure Departmental coverage, but it also reaches the other sides of the Haitian Territory (ex .: The island of Gonave, the Turtle Island , Petit-Goave, Fort-Liberté) and in the heights of Port-au-Prince, the capital. Always with the best programming, it touches and enters little by little in the dailies of Haitians in Haiti as well as abroad.