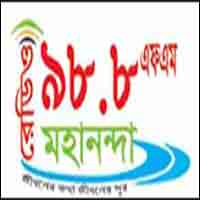 The message of life of life is the tune of this message. On 28th December 2011, the only community radio in the district of Chapainawabganj, Radio Mahananda Live was added to the district’s propaganda wave. Start the official way. But behind this there is a general story and there are various excavations of effort.

‘Radio Mahananda Live’ on April 22, 2010, the Ministry of Information of the Government of the People’s Republic of Bangladesh received the initial approval for setting up the radio. After the approval came the turn of the implementation of dreams. But the need for financial and technical assistance to set up a good community community radio is essential. Later, the Japanese government came forward to install ‘Radio Mahananda’ and its components. As a result, the community radio station Radio Mahananda was given to set up community radio. Japan Embassy Councilor, Mr. Masayukitiga, announced on January 14, 2012 these parts of the technical parts and declared the parts as formal broadcastable. Then on February 1, 2012, Honorable Minister of the Ministry of Railways, Mr. Suranjit Sengupta announced the inauguration of the formal radio broadcast of Radio Mahananda in the conference room of Chapainawabganj District Circuit House.

On October 28, 2011, at 1:43 pm, on October 29, ‘RadioMahananda’ started its first experimental broadcast and it was initially broadcast for 27 minutes. Technical parts were examined at this stage. Later on 15 November 2011, the broadcast began again at 8:00 pm. Then there is a broadcast from 16 to 23 in the afternoon from 3pm to 10pm. And from 24th to 5th December, any time of the day was broadcast for 1 hour. Members of the Central Technical Committee of the Community Radio Regulatory Committee visited Radio Mahananda station on 4-5 December 2011 and gave permission for the broadcast. As a result, the transmission starts from 3pm to 10pm again from 6th December. Later, on 28 December 2011, the Ministry of Information, Ministry of Information, Government of the People’s Republic of Bangladesh was licensed for broadcasting ‘Radio Mahananda’.

Information is a right. The informationless people are like a lion’s moon. Therefore, the initiative has taken initiative to meet the information needs of village-city, high-low, well-received, and non-profit groups of people. Due to the deprivation of data services, the division of the society has been created due to the distance, the effort has been made to overcome the gap, to make it easier for all the people to work and promote the information and to make people’s life more vigorous. So, the dream dream is to set up a community radio in the context of social change. The effort has been to make Chapainawabganj and its adjacent people easily access to information, eliminating the information and knowledge gap between the city and the village, through free access to information exchange, transparency, accountability, education and development through democratic control of the local people. Work to bridge bridges for objective information flow. Dreams are implemented today but beyond the journey.

To know more visit to: www.radiomahananda.fm